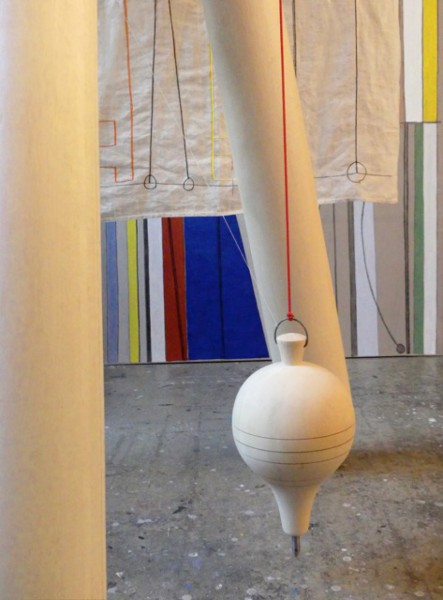 "What has not been “fixed” is nothing. What's fixed is dead".
Paul Valéry, Notebooks

"Not a day without a line" .
Paul Klee, Creative credo

The series of paintings presented by Julio Villani in his second exhibition at RX gallery holds a generic title: collapsible architectures. The adjective was chosen in english, as the French words "pliable" and "démontable" do not present the same unpredictable dimension : one which can crumple at any moment.
His pictorial production echoes his Instabilis, assemblages supported by the tension of a thread, shaky forms through which Villani seeks an everlasting interruption of the movement: the obtention of a state continuously oscillating between mobile and stable (as Zeno’s arrow, which "flies and does not fly" or Achilles, who "stands still albeit running" ).
After all, there is no real immobility. "Nothing exists in a permanent state", suggests Roland Barthes. "The tree is new at any given moment", we focus on its generic fixed form only because we don’t grasp the subtleties of its movement.
Villani’s work as a whole seems to be built according to a system of (mental) construction owing to the relativity of fixity, and consisting in suspending, for as long as possible, these silent transformations, the imperceptible motions which separate a being from its becoming.
The line here is not the shortest distance connecting two points, but what takes shape when a dot hops out and about. It is impossible to predict how far it will go. Sometimes, it jumps from the frame, thrusts itself into space; the line then becomes thread, string, chord, rope, and draws in the air.
Villani’s lineaments are as many means of setting creation in motion and rendering borders unstable. In his architectures, they extend well beyond the canvas: the frame is the only a portion of the whole structure which he allows us to see, located between an invisible beginning and an imaginary end. They both hold potential bifurcations, which the artist does not hesitate to follow : one after the other, one simultaneously to the other.
The result is a manyfold art, composed of poetic overlaps, in which the line is totally free to follow its path – from painting to embroidery, from collage to sculpture.

Roland Barthes, The pleasure of the text, 1973.