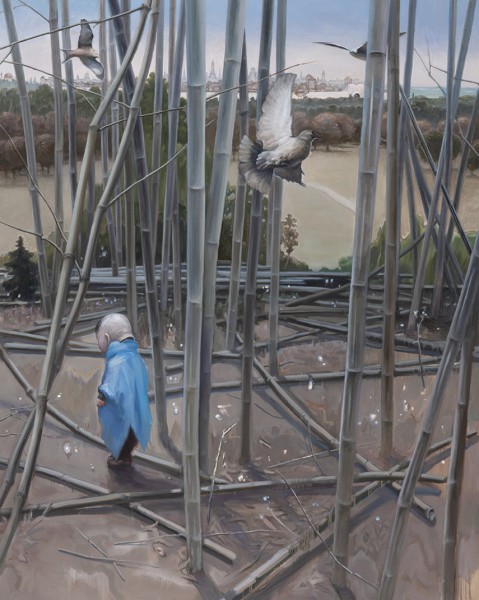 “The passage symbolizes the transformation step necessary for any evolution. Initiation rites of many religions involve a passage from which the insider only steps out if he has confronted and overcame the difficulties. The one who got through the passage is not the same anymore. He has evolved, matured and has grown up.”

Xiao fan RU depicts the rite of passage in his canvas.

The sacrament of life is established through the painter’s eye, designated by its fragments and metaphors. Xiao Fan RU is interested in the symbolical aspect of things, the persistence of poetical forms as a creative process.
As a Chinese painter living since more than 35 years in France, he uses pictorial language to talk about his life, and asserts this anchorage in a dual culture which deeply marks his work.

Classical Chinese painting opened his inspiration to a large thematical area on nature and Xiao Fan pursues here this observation. He places himself as the spectator of a world on which human prints his deleterious mark.

In the image of the tale of “The scorpion and the frog”, illustrating some irreversible behaviors regardless of the consequences, he provides a sweet and bitter overview where pessimism and humanist perspective coexist.
Thus, his new painting set discloses landscapes that are often desolate, where green plains give way to barren lands. He appeals here to the legacy of art history and Italian Renaissance (Piero della Francesca, Paolo Uccelo) and to symbols of Asian culture, such as the bamboo. Sign of peace, in the Feng-Shui it is also a carrier of joy and a symbol of fertility and righteousness. The movement of the leaves is associated with the adaptability to time and to social life. In the scenes of consternation observed in some of his canvas, only the bamboo stands. Simultaneously strong and flexible, the bamboo bends but does not break.
Conversely, the characters in his paintings are caught up in the turmoil and seem to suffer from the elements and the pressure surrounding them.

Similar to the contradictions that drive and affect us, the artist offers a distanced analysis which transcends life’s absurdities.
Through his paintings, Xiao fan RU tirelessly questions the world through which he journeys.
Familiar with symbols, and in a naturalistic allegory, he does not hesitate to give a plant and animal form to human condition.
The artist seems to be reaching another dimension, more meditative, embodying misery and transcendence of life on earth; a desire of elevation and escape by an onirism that vindicates its ambivalence.

Indeed, prior to being a paintbrush on a canvas, the painter is an eye, a head and a heart.