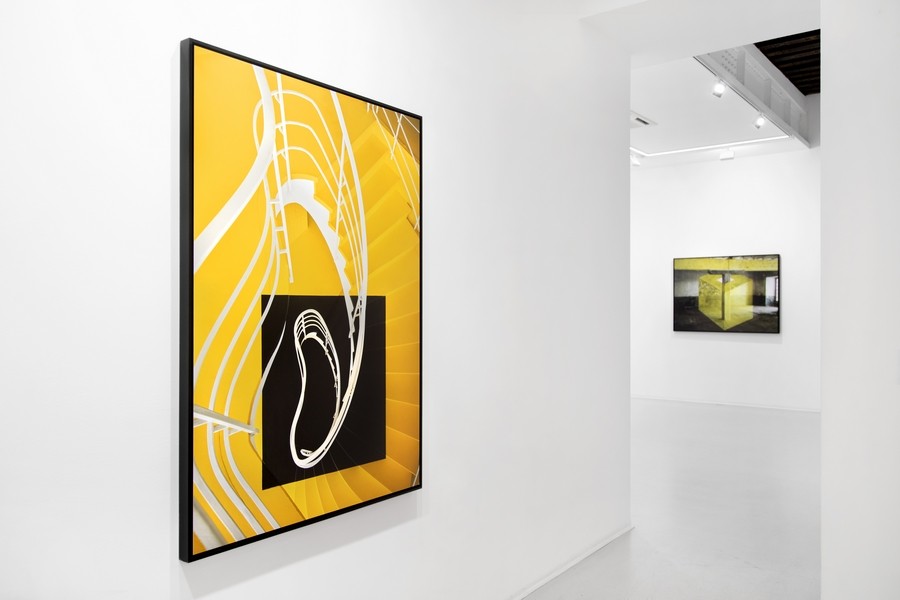 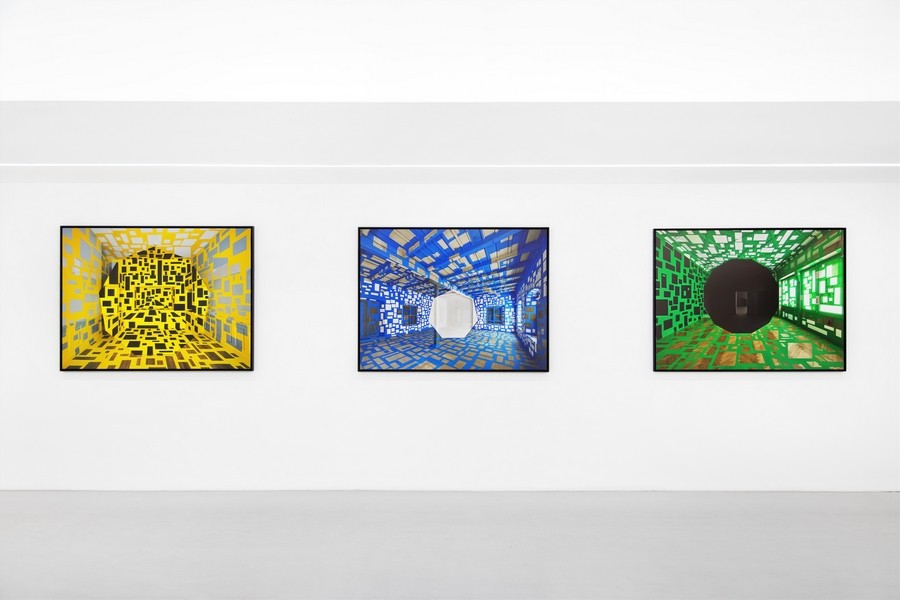 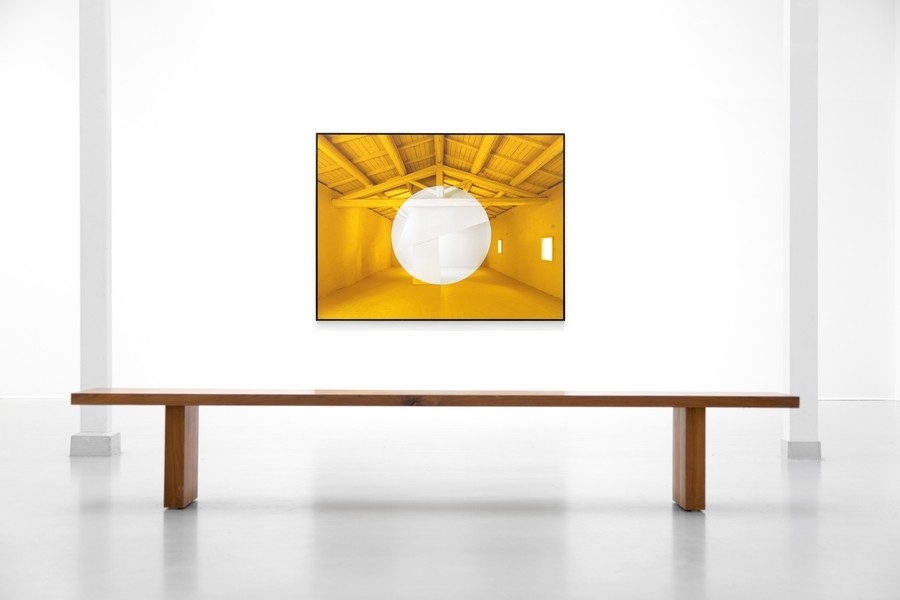 Georges Rousse unveils his projects from the last two years, which include about twenty photographs and a dozen drawings. This exposition presents itself as a journey through several towns in Europe and the shock of the COVID-19 pandemic: Milan through Pouilles, to Libson, passing Heidelberg, Montauban, Rognes, Ivry, Vence and Bastia. The driving force in these works remains geometry and color, the alpha and omega of the work of Georges Rousse. This is his fourth personal exhibition at Galerie RX.

Georges Rousse sculpts space, bringing volumes into light, placed as levitating simple geometric forms. In this new series, he plays with saturated colors, monochrome yellow for example, in the Heidelberg garage or in Bonisson Art Center of Rognes – which harkens back to the material of the paintings of Nicolas Poussin or of Simon Vouet – the green in the olive oil factory of Manduria in Pouilles – which varies as a function of the intensity of light during the day – or the three primary colors complete green in the desacralized church in Bastia. They are imposed in every one of these spaces which inspired and guided in function of their story, their architecture, their ambiance, and their volumes. Thus, the artist reveals a state which is born from his joining of the genius of these places.

The spaces that Georges Rousse metamorphosizes are waiting to become something in the future, generally neglect: between abandoned factories and industrial buildings to restore. The artist bandages them with his strokes of the paintbrush, “repairing” them and giving them a fleeting artistic aura. He is sometimes a painter, architect, designer, and photographer. He plays with visitor’s perception and brings them a two-dimensional geometric object with the magic of anamorphosis. One must be in a precise location to have perfect alignment between themselves and the form. Sometimes, the volume of the room and the flattened square or circle which appear to be floating in a fictive space coexist. The artist’s desire to “perturb the organization of space” was inspired by Quadrangle de Malevitch – “the painter who provoked my desire to introduce painting to the field of photography” he confides – only the father of suprematism popularized the usage of the corner of the room in an exposition “0.10” in 1915, the same place where the icons of Russia hung. Without claiming responsibility for this spiritual reference, Georges Rousse creates these artistic epiphanies, stupendous illusionary moments, and fictional stories of places he encounters. In some ways, spatial utopias.

Art of the Ephemeral

The photography of Georges Rousse relieves marks. The building is the only witness of this fleeting work and a moment stopped in a mise en abyme, a work within a work. These installations are the recalling memory that perfectly translate the concept of “what once was” de Roland Barthes: the moment was there when the photo was taken, though its reality has passed, photography is sometimes the sole witness and the art. So, architect of space Georges Rousse photographs a dimension that does not exist and a situation that the rules might define as temporary. The exceptional response to the rule of course: following an exposition, the installation becomes semi-temporary, like the famed creation for the museum Ingres Bourdelle in Montauban that one could experience until the 30th of April, 2022. Georges Rousse was inspired by a painting of Ingres, la Vierge à l’hostie, which he reinterprets with two circles inscribed in a square, baptizes Épiphanie. We figure that in transparences of the bricks, the plaster and the vaults of the room of the black Prince, situated in the medieval founding principles of the old Episcopal palace.

With the photograph as the finished product, the drawings give access to the entire process of creation, to the preparatory steps which permitted putting the work in an operational phase. If the form can once again change with the realization in situ, the color, it is permanent. These drawings are vital in the collection of the work of an artist because they preserve the story of different steps of research and the evolution of the project.

Life and work in Paris, France.

All over the world for the last twenty years, Georges Rousse set up his work and his photography rooms in abandoned buildings, before their destruction or rehabilitation. He set up his nomad workshop in spaces he gave a new story, a new spirit. As he likes to say, “I callback several artistic practices: I am the designer of the project, painter in the space, architect of my interpretation of space and the construction that I organize there. Finally, I photograph to reassemble all of my actions.”

New spaces are created by the effects of perspective, anamorphosis, and optical illusions. With photography, movement through space three-dimensionally with a two-dimensional image confuses the eye and brings the viewer into a fantasy, like a painting. The viewer perceives all of the complexity of the relationships between architecture, photography, and painting in these peaceful photographs in a serene and relaxed atmosphere.